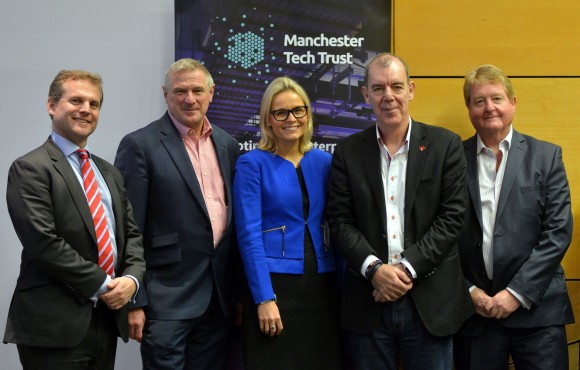 Leaders and Achievers from business, technology and public sector led by Siemens’ Juergen Maier join to boost the city’s tech enterprise scene. Manchester Tech Trust (MTT), the non-profit organisation set up a year ago to link up investors and early stage tech businesses, has announced a powerful new network.

The Tech Trust Network (the Network) launches with 40 of the city’s tech leaders and influencers who believe that Manchester has all the ingredients to be a world-class hub for technology. The plan is to expand the network by invitation, to embrace a wide spectrum of supporters from all areas of the Greater Manchester tech ecosystem. Network members have committed to being advocates for the city’s technology community by:

MTT Chairman Neil McArthur, a co-founder of Talk Talk, says: “The Manchester tech sector is growing but still has yet to reach its true potential. We are building a strong and visible network of like-minded people who love Manchester and want to see it thrive. “Through our Manchester Tech Trust website and events, we have established ourselves as a super connector, the ‘go to’ organisation in the city to bring people, support and finance together to make things happen quickly and effectively.”

Backing Neil McArthur’s vision, figures from the investment and business community joining the Network include Juergen Maier, Chief Executive of Siemens and Chairman of the NW Business Leadership team, who also joins MTT’s Advisory Board. Mr. Maier says: “Neil McArthur and the team are part of a proud Manchester tradition built around innovation, entrepreneurship and giving back to the community. These ingredients are exactly what Manchester needs as it seeks to forge its own path to creating a truly globally recognised base for the future of tech. “I am impressed with the contribution Manchester Tech Trust is making to the city region’s dynamic and growing technology sector, and am pleased to be joining the trust’s advisory board and network.”

The increasingly vital relationship between universities and enterprise is seen by academe’s representatives Professor Robin Bargar, Executive Director of the Studio for International Media and Technology, University of Salford, Professor Luke Georghiou, Vice-President for Research and Innovation, University of Manchester, and Professor Richard Greene, Pro-Vice-Chancellor for Research and Knowledge Exchange at Manchester Metropolitan University.

From the emerging digital economy, there is Jon Corner, CEO of MediaCity UK’s digital and tech enterprise hub The Landing, Darren Earnshaw, Head of Lending Technology for Barclays UK and Tony Foggett, CEO of Code Computerlove. Entrepreneurs are represented by among others Elizabeth Clark, CEO and co-founder of Dream Agility, Paul Gouge, CEO of Playdemic, Gary Partington, co-founder of Reality Mine and Steve Oliver, co-Founder and Group CEO musicMagpie.

Other Network members include ‘Applied Futurist’ and media commentator Tom Cheesewright and Head of Innovation and Partnerships at Manchester Science Partnerships Anne Dornan.

MTT CEO Peter Lusty says: “Following the success of the first year of MTT, and with an advisory board now in place, we now have a comprehensive register of experienced supporters in our Network. “They are willing to be public champions for the sector and also to provide mentoring, advice and guidance to the city’s next generation of tech entrepreneurs.”

MTT has held dozens of one-to-one advice sessions with start-ups and scale-up businesses since its launch – an activity which is ongoing – and have an exciting programme of events lined up for the rest of 2017.